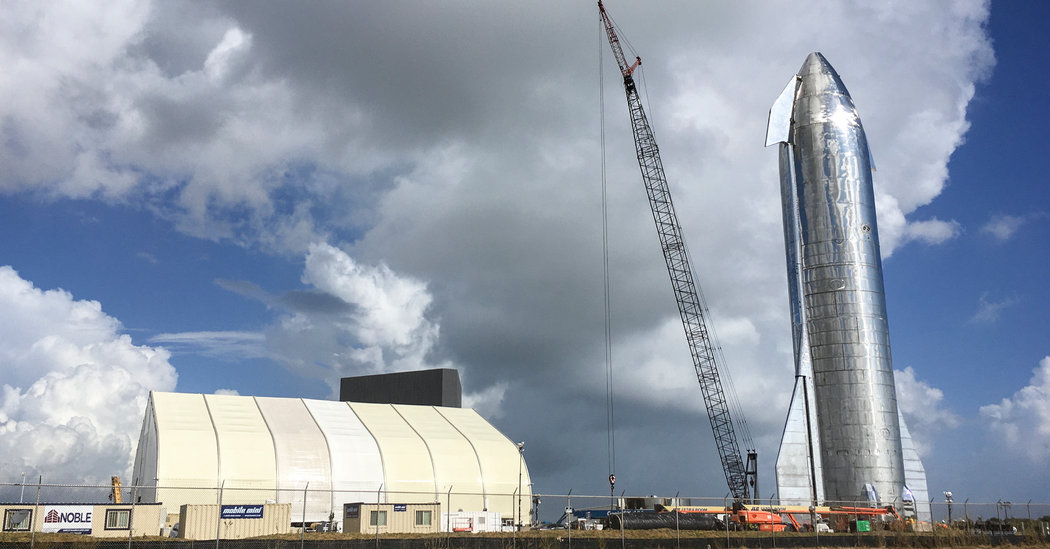 BOCA CHICA VILLAGE, Texas — As Elon Musk, the founder and chief executive of SpaceX, says repeatedly, he created a rocket company because he wanted to colonize Mars. His fervent argument is that humanity must spread to a second planet as insurance for long-term survival.

“Which future do you want?” he asked near the start of a presentation on Saturday night at a launch site near the southern tip of Texas, during which he said the options were being “confined to Earth” or become a spacefaring species.

Mr. Musk said he hoped the audience agreed that humans should prepare for life elsewhere in the solar system as he delivered a progress report on Starship, a giant rocket that is the centerpiece of his ambitions.

[Read more from a Times interview with Elon Musk on SpaceX’s Starship.]

Standing before the prototype and an older rocket built early in the company’s history, he pledged that Starship would first take off to an altitude of 65,000 feet and then land, “in about one to two months.”

“This is going to sound totally nuts,” he said later, “but I think we want to try to reach orbit in less than 6 months,” adding that this timeline relied on continued improvements in manufacturing the rockets.

You can watch the presentation at SpaceX’s website, or in the video player below.

Starship is the latest name for the upper stage of what Mr. Musk had been calling B.F.R. The “B” stood for Big, the “R” stood for Rocket, and Mr. Musk never publicly stated the meaning of “F.”

SpaceX currently flies two rockets: the Falcon 9 and the Falcon Heavy, which is essentially a Falcon 9 with two additional Falcon 9 boosters attached to the side. The present-day Falcons are too small for sending people to Mars.

Mr. Musk and SpaceX have long envisioned a much larger rocket. For a while, Mr. Musk referred to it as the “Mars Colonial Transporter.” But when he finally revealed a design at the International Astronautical Congress in Guadalajara, Mexico, in 2016, he called it the “Interplanetary Transport System.”

This spaceship was gargantuan, with a diameter of nearly 40 feet, and the capacity to take 100 people to Mars.

A year later in Australia, Mr. Musk said the rocket had been scaled down by one-quarter, to a diameter of 30 feet. This was the B.F.R. The second stage was sleek-looking spacecraft that would return to Earth in one piece, and land vertically.

Last November, SpaceX announced the Starship name; the first stage of B.F.R. is now known as the Super Heavy booster. In recent days, Mr. Musk has been posting updates as the prototypes come together.

On Saturday before Mr. Musk’s presentation, SpaceX highlighted Starship’s size by displaying it alongside the company’s original Falcon 1 rocket, which first launched to orbit in 2008.

Can this really be done?

Starship with the Super Heavy booster is essentially a rocket as powerful as a Saturn 5, which took NASA’s Apollo astronauts to the moon 50 years ago, but it’s fully reusable. For Apollo, everything but the small capsule on top, where the astronauts sat, was discarded along the way, and even the capsule could only be used once.

Experts say Starship is within the realm of the possible, without requiring impossible physics or unlikely technological leaps. Indeed, Starship employs ideas that were studied decades ago but never built. The biggest innovation is perhaps that SpaceX and Mr. Musk have applied the accelerated research-and-development approach of Silicon Valley, building fast and fixing failures fast.

Two competing teams at SpaceX are each building prototypes of Starship. One is in Florida, near Cape Canaveral; the other is at Boca Chica in Texas.

Why is Starship shiny and silver?

While most rockets these days have more utilitarian appearances, SpaceX’s prototype resembles something from an old sci-fi movie of the 1950s.

In part, that is because in its rush to get the prototypes to the launchpad, SpaceX has not bothered with such aesthetic niceties as paint. But there also are good engineering reasons for the choice of material.

Mr. Musk originally had planned to use high-tech carbon fiber, but switched to stainless steel. Steel is heavier than carbon fiber and aluminum, another common material used for rockets, but it is also cheaper — about 2 percent of the cost of carbon fiber, Mr. Musk said — and has a higher melting temperature that can more easily withstand the heat of re-entry into Earth’s atmosphere.

In August, SpaceX tested a simple prototype that it called Starhopper, with a single engine, which Mr. Musk earlier compared to a flying water tower. It lifted to an altitude of 500 feet, flew sideways and then set down at a different spot.

The flight lasted 57 seconds. A shorter July flight went 65 feet in the air.

When will Starship take off?

At Saturday’s presentation, Mr. Musk provided updated schedules for the next phase of test launches, which will start with suborbital flights before heading to orbit. While SpaceX officials have said in the past that a cargo version of Starship could start launching satellites as early as 2021, Mr. Musk said that he could even imagine a mission to space with a crew aboard next year.

Mr. Musk, however, has a history of overly optimistic predictions. In Guadalajara in 2016, for example, he said the aim was to send the first cargo flight to Mars in 2022 and the first people there two years later. Those dates are unlikely to be met.

On Friday, NASA Administrator Jim Bridenstine reminded Mr. Musk that NASA, SpaceX’s biggest and most important customer, was awaiting the delivery of another big SpaceX project: taking NASA astronauts to the International Space Station in the company’s Crew Dragon capsules.

Neither SpaceX nor Boeing, which also received a contract for providing transportation for NASA astronauts, appears to be on track to launch crews this year. When the contracts were awarded in 2014, NASA hoped that the flights would begin as early as 2017.

On Saturday, Mr. Musk responded to Mr. Bridenstine’s comments, stating that, “the vast majority,” of SpaceX’s resources were focused on its current rockets and capsules, including the Crew Dragon capsule for NASA.

How does SpaceX make money with Starship?

While experts find Starship to be technologically feasible, they do question how SpaceX can make enough money with it. Without a profitable business, SpaceX could not finance its expensive Mars ambitions, which are unlikely to make money anytime soon.

Mr. Musk has talked of the Starship replacing both Falcon 9 and Falcon Heavy. But the rocket is much bigger than needed: Think of taking a semitrailer truck to go grocery shopping.

A cargo Starship could conceivably take up several satellites at once, but satellites typically circle Earth in different orbits, and coordinating launches among different customers is difficult.

SpaceX officials have also talked about how Starship could shuttle people across the world at speeds much faster than airplanes; a flight from New York to Tokyo could take less than an hour. Still, the question remains: How many people are willing to pay at great expense for a faster trip?

How does Starship compare to NASA’s rockets?

NASA is working on its own big rocket, called the Space Launch System, that will initially be able to lift about 70 metric tons; a later, upgraded version is to lift 130 metric tons. (Starship with Super Heavy will lift more than 100 metric tons.)

But while SpaceX’s Starship and Super Heavy take advantage of cutting-edge technologies and are fully reusable, S.L.S. is largely a remix of components from the retired space shuttles.

It is also not reusable; estimates are that it will cost $1 billion per launch, and launch no more than once a year.

NASA also already spent billions on S.L.S., first announced in 2011, and Orion, the crew-carrying capsule. The first S.L.S. flight has been delayed for years; it is not expected to lift off until 2021. The first moon landing by astronauts is to occur on the third launch of S.L.S.

The delays and cost overruns of S.L.S. frustrate many space aficionados, as well as NASA’s inspector general and the United States Government Accountability Office. Some contend NASA could get places quicker and more cheaply if it took better advantage of commercial developments like Starship.

However, to date, Congress, which decides NASA’s budget and priorities, has continued to finance work on S.L.S. and Orion.

Here are the most dramatic looks from the MET Gala

Walmart blows Amazon out of the water with its own free, next-day delivery